Introduction to the Basic Styles of Rock Climbing 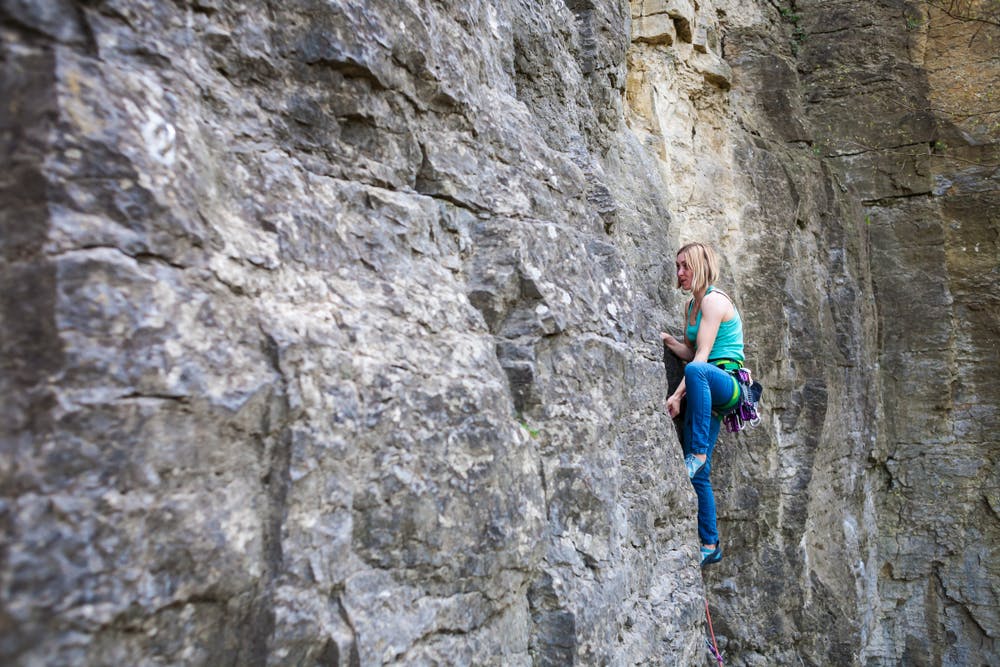 In theory, rock climbing seems like a very easy sport to understand. Unlike baseball or hockey, the name itself sums up the entire objective of the sport: climbing rocks. However, rock climbing is not nearly as simple as it appears, and to the beginner, finding information about where to start can be downright daunting. In the following paragraphs, five of the most common and popular styles are outlined. Although there are many smaller subcategories, this will serve well as a guide to anyone just getting interested in the sport.

The most common way for people to be introduced to the sport is through the style known as top roping. In this method, an anchor (any piece of strong metal that allows the rope to move freely through it) is attached to the top of the wall. The rope is passed through the anchor and down to the climber, who clips the rope to her harness using a carabiner (a small, but very strong metal clip that supports the weight of the climber). On the other end of the rope is a belayer. A belayer is responsible for the safety of the climber, and supports the weight of the climber should the climber fall. When the climber reaches the top, she may either climb back down a route, or, usually, she will rappel, using the belayer to give the rope a safe but consistent amount of slack while the climber descends to the ground. This style is generally reserved for beginners, as it has very little application to the other styles of rock climbing. It is most commonly found in indoor climbing gyms, malls, fairs, and other places where first time climbers can get exposure to the sport.

Sport climbing involves climbing on a rock face while clipping in to pre-placed bolts that are drilled into the wall. A length of rope is connected to the climber’s harness, and as the climber progresses up the face of the rock, he will clip into these bolts, using them as “checkpoints”. In other words if the climber falls, he falls to the last bolt he clipped into, rather than plummeting down to the base of the wall. First time climbers should have someone with experience in sport climbing guide them through the process a few times before attempting this method on their own.

Traditional climbing, or “trad”, is similar to sports climbing, with a few differences. In traditional climbing, at least two people must be on the wall on the same route: the leader and the follower(s). As the leader advances up the face, she places “natural” protective gear, which is gear that can be easily removed, unlike a bolt. When she gets to a place on the rock where she can gain control, she then belays up the follower(s). The final follower removes the protective gear as he goes. Being the lead takes a great deal of experience, as the lead is responsible for the safety of every climber on the rock. Traditional climbing is considered more environmentally responsible than sports climbing due to the fact that there is no trace of any climbers left behind in traditional climbing.

Bouldering involves climbing on short (generally no higher than 20 feet) but highly technical routes. Bouldering has an entirely different system of ratings than the other styles of climbing because of its advanced technical nature. The only form of protection in bouldering is a thick, padded mat placed on the ground to prevent serious injury. Despite this, it is still common for bouldering injuries to occur, so learning how to fall properly and use a spotter is paramount for the beginner. Bouldering gyms are fairly common throughout the country, with artificially made holds that simulate the holds one would encounter while on a natural rock wall. Bouldering gyms are an excellent place to gain the technical skills necessary to participate in other styles of climbing.

By far the purest, and most dangerous, style of rock climbing. In this style, a climber ascends the rock face with no protection. Rock faces in free soloing can extend thousands of feet into the air, so if the climber makes a mistake, it almost always results in death. Very few professional climbers even participate in this style.

In order for the beginning climber to get started in the sport, it is helpful to know where he or she will begin. The five main styles: top roping, sports climbing, traditional climbing, bouldering, and free soloing are excellent things to be aware of as a climber’s skill progresses and he or she needs to set new goals. In the sport of climbing, the potential is limitless, and the best way to start is to get out there…and climb!

Abseiling in Victoria’s beautiful Natural Parks invigorates all your senses with a 3-hour extended Rap Jumping session out in the bush with as many jumps as you can handle!

Abseiling in Victoria’s beautiful Natural Parks invigorates all your senses with a 3-hour extended Rap Jumping session out in the bush with as many jumps as you can handle!

Abseiling in Victoria’s Beautiful Natural Parks Invigorate all your senses with a 3-hour extended Rap Jumping session out in the bush with as many jumps as you can handle!

Abseiling in Victoria’s Beautiful Natural Parks Invigorate all your senses with a 3-hour extended Rap Jumping session out in the bush with as many jumps as you can handle!