Rap Jumping Vs Other Rappelling Methods: What’s the Difference? 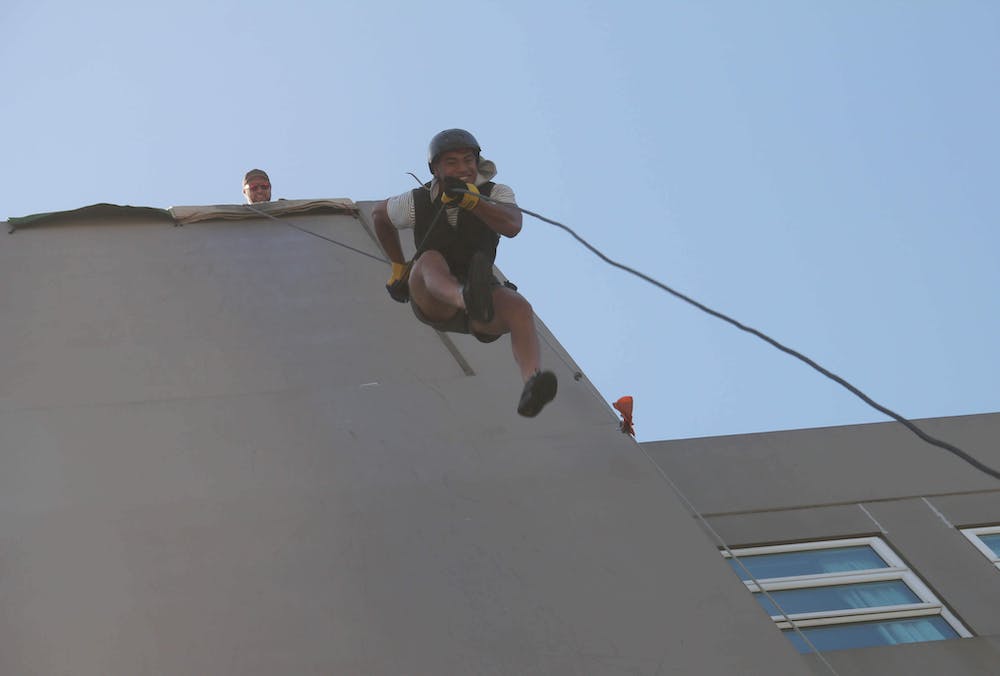 For those who have never tried or heard of rap jumping before, it’s an exciting new way to push your limits. A highly advanced form of rope work, it’s not dissimilar to other methods of descent such as abseiling – however, there are certain characteristics that separate the Rap Jumping method from other types of rope work.

It’s easy to confuse the different descent methods, as there are many similarities and names are often used interchangeably. If you struggle to differentiate between abseiling, Aussie rappelling, deepelling and angel jumping you’re not alone; this article is designed to provide some clarity!

Abseiling – which is also known as the ‘standard rappel’ – is defined as the controlled descent of a vertical drop by way of a fixed rope. Feet remain in contact with the vertical surface and the climber essentially walks backwards down the wall whilst letting the rope slide steadily through the belay device.

The descent is performed backwards rather than forwards – i.e. the climber faces the vertical surface. This is the key difference when it comes to comparing standard abseiling with other descent methods such as Aussie rappel, angel jumping and deepelling.

Australian repelling – or the “Aussie rappel” as it’s more commonly referred to – is a forward SRT rappel developed by the Australian SAS in the 1960s. Think forward-facing abseiling if you’re still confused!

Deepelling is essentially the Canadian version of the Aussie Rappel; it is derived from the Australian method. As with Aussie Rappel, participants descend facing forward – however their rope side hand sits behind the descender.

According to an article published in The Globe and Mail, deepelling is only offered as an adventure sport in two places: Grand Falls, New Brunswick and at a city tower in Décalade, Quebec.

It’s quite common for the term ‘angel jump’ to be thrown in the mix when talking about rap jumping.

Also known as ‘rope rush’, ‘angel diving’ and ‘slack rope Australian rappelling’, this method generally requires a large overhanging pitch. The participant pulls a certain amount of slack rope through the descender before jumping, attaching it to the front of the harness using a karabiner. The participant then jumps from the edge and free falls until the rope tightens and the descender takes up the slack. The participant either stops themselves or keeps their hands off the rope and allows the brake person to stop them. When braking themselves, the participant keeps one hand by their side and the other behind their back (as per standard abseiling).

What do we offer?

Here at Rap Jumping, we practise a commercialised version of the Aussie rappel – a method we refer to as ‘Rap Jumping’.

It is essentially a cross between Aussie rappel and angel jumping. Participants descend facing forward and are allowed to ‘jump’; however we do not allow you to take your hands off the rope as safety is always our number one priority.

You’re in full control of your descent speed – however, a brake person is also used as a safety measure should you need any assistance.

We provide you with two different options to choose from. For those who love the feeling of adrenaline pumping through their veins, we offer our Ultimate Experience course; this involves the traditional forward-facing rap jumping method on which our company was built. In addition, we also offer a beginner’s course that involves standard (backward-facing) abseiling. Whether you are grappling with a fear of heights or are not one to normally partake in extreme sports, this course is the perfect introduction. We find that many of our abseiling clients go on to try rap jumping; once you’ve conquered your fear of heights you will want to master the real thing!

So what are you waiting for? If you would like to try your hand at rap jumping or abseiling, be sure to book today!

Starting at $99 | Conquer your fear of heights!